When the Rain Stops

Apparently; southern Australia is in a “Neutral El Niño” faze, but we are on El Niño watch, meaning there is a 50% chance of one developing during our Autumn / Winter…. which means even less Autumn and winter rain. Well, we’ve been “enjoying the rain” so far haven’t we…!? 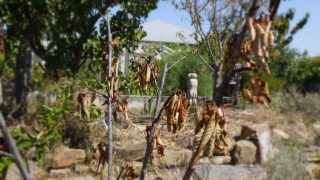 I can handle a lower yield from perennials and fruit trees; but when they start dying that’s not good.

That’s not really what I wanted to complain about; although the garden casualties are starting to accumulate; the latest and worst of which (so far) is my 3yo Cherry Tree, which was just getting established and in a very healthy part of the food-forest. Everything else in the food forest is alive (despite very little water); but ‘understory’ plants are long dead or gone to seed; and this is ok – all manner of things have self seeded there, including Parsley, Coriander, Dill, Parsnips and Silverbeet…  When the rains come, these will all come back and create a sea of edible green. 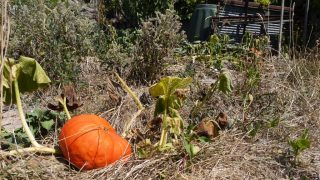 Not many pumpkins this year.

This post is a quick one about ‘Permaculture Methods‘ in the face of prolonged ‘drought’ (I don’t wish to use that term to compare our situation with that of people in real drought, but you get what I mean).  In truth some methods such as rainwater harvesting, storing water in the soil, companion planting in guilds etc, only work when there IS water available in the first place.  In a good year, it doesn’t take much – a summer downpour or two, both tops up pond and tanks, but also recharges plants and soils.  The summer of 2017/2018 was ideal, with 43mm in Dec, and 59mm in Jan – which got the garden through early Autumn no problem.

This summer, not so much; with barely 7-8mm in the last 2 months. So like the average gardening Joe, we’re back to relying on mains water to keep things functioning and alive etc. But there’s still a bunch of permaculture techniques in place that are effective in these dry conditions.

How is our water supplier going?  Well Barwon Water storages are at 42% they have stated that there will be no water restrictions this season… However an El-Nino, and another dry spring might result in water restrictions next summer; which will be another challenge.  Despite the dry conditions however (and mostly empty water tanks); our summer water consumption is still only 315L / day, which is still well below the average consumption of 415L/Day*. 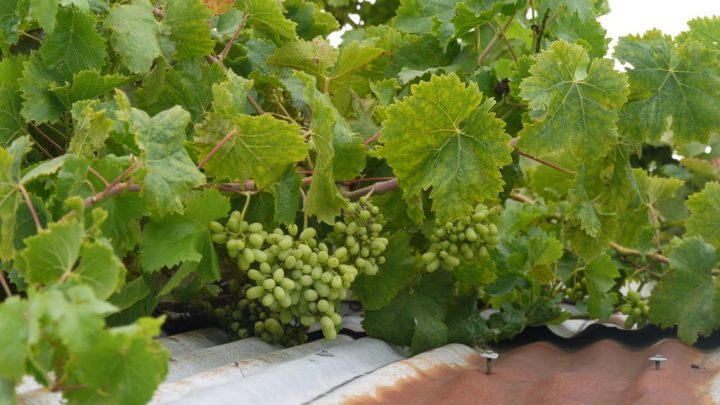 In the meantime, climate extremes are forcing food prices to go up (as we all expected, right)?

There’s the usual whining media and commentators; but really what do they expect when we do nothing about climate change.  Hint – it’s going to get a lot, like A LOT worse folks. Sure the current situation may be short-lived and not actually that dire…. but it’s worth paying attention.

In the meantime; we enjoy the summer as best we can, even if that involves hiding inside (or under a cliff) rather than burning ourselves to a crisp at the beach.

* It gets ‘even worse’, as this 415L figure is an average over the year and for household sizes of 2-4 people. The actual summer water consumption across all households in 2017-2018 was 600L / day (Barwon Water annual report).