Now you’d think that having been here for several years now, we’d have a thriving mature food forest, ready to be a showcase for local permaculture! And yet, this has been one area that has received relatively little attention, until now…!

So what’s held us back?
When we first started establishing this part of the garden, we lacked the experience to design it fully, and with so much else going on in the garden, it was relegated to near the end of a very long list.

No bought in soil here… this is no-dig clay – topped with a bit of goodness… but a year later it was a couch infested mass that took about 12 hours of work to clear by hand.

Apart from a whole truckload of mulch to combat the couch grass (almost none of this area has been sprayed) it has received very few external inputs – no straw, no manure, no irrigation. Things were so dry in the summer, even the weeds wouldn’t grow!

Instead, we threw a few things in the ground, and nature was allowed to experiment with succession1, while the soil was gradually improved from the mulch and the plants that did survive. It was a deliberate neglect. Even so, we’ve yielded berries, various herbs, potatoes, artichokes and much more that could survive without much attention.

So if that’s a failed or ‘non-design’, what is a successful one?
Apart from the bleeding obvious, what else is a permaculture ‘food forest’?

A well-designed food forest is a self supporting system, that accelerates succession, and once established, provides edible food, useful products and ecosystem services regardless of whether humans are present, or able to maintain it.

Of course input from us in form of pruning, mulching, ‘chop and drop’, etc will help to improve health and yield, but we should be able to leave the system to it’s own devices for an extended period of time, and still return to a healthy system. 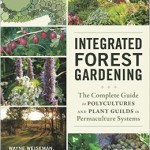 So, armed with some inspiration and an excellent book ‘Integrated Forest Gardening‘, I set about designing our new food forest.  In all, about 115m2, and a dozen new varieties of fruit trees (on top of the existing ten already planted).  It’s amazing what abundance you can create on a piece of paper!

The research was intensive – researching the needs, functions and yields of over 75 species of plants; and how they interact.  Yet at the same time – there’s no exact prescription; the system will evolve over time, and the design will change depending on what works and doesn’t work in our particular location.

So, now it just needs planting out! We’ll let you know how it goes…

Below is the ‘final’ design (click to view full size), and an example of the featured cherry tree guild (tree #7 on the map), and it’s supportive species. 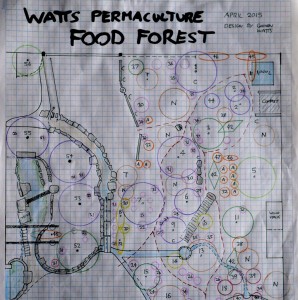 1) Succession: Nature will fill empty, barren or disturbed ground with plants which quickly stabilise and build the soil, to prepare the ground for progressively larger plants, until the area is filled with trees